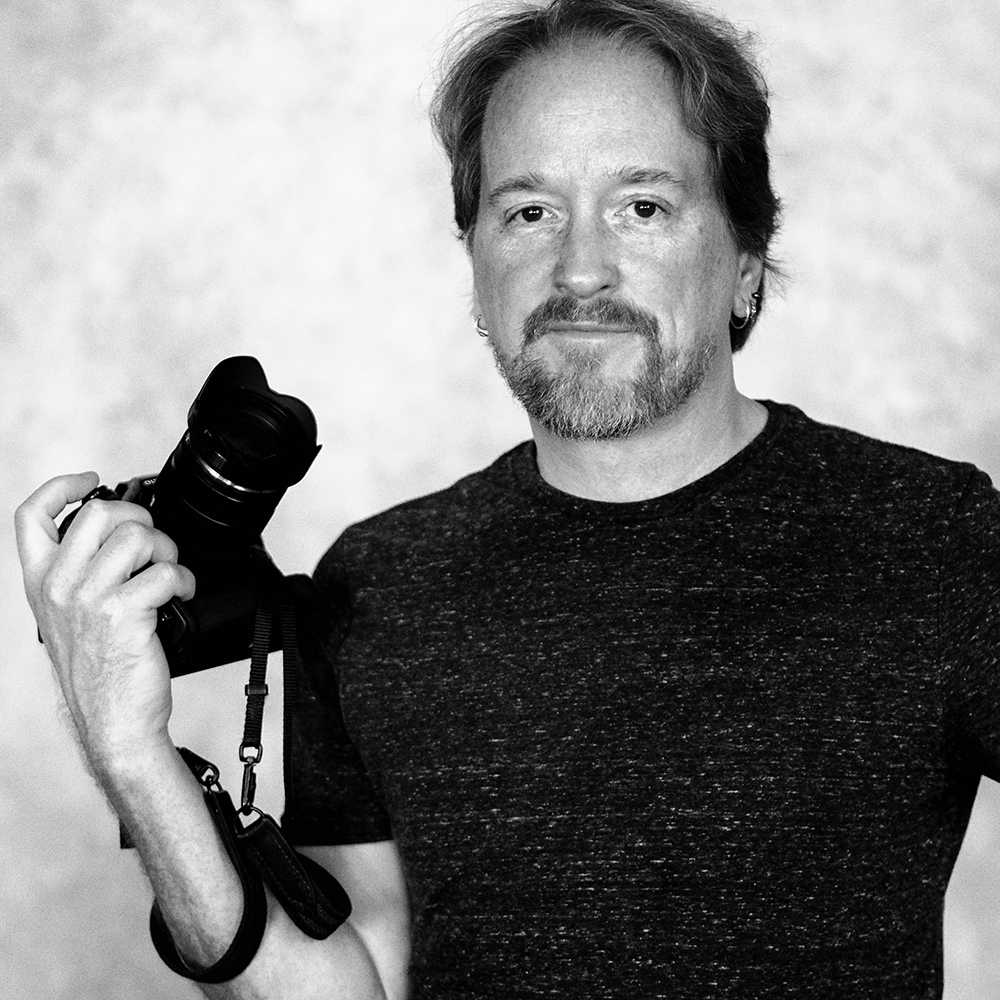 Fellow PRN Alum, Stacia Lang, sat down with Steve for this Spotlight Q&A:

Stacia Lang: While working with Prince as a graphic designer, how did you segue into being his photographer? Do you remember the very first time when he asked you to take photos of him?

He walked into my office and asked if I had heard of digital cameras (new at the time) and I said no. He asked if I could use a camera, and thanks to my work on my high school and college newspapers I DID! So I said yes. I was trying to use strobes with the camera for my first shoot, but I had NO idea what I was doing. It was rather flat. So Prince saw it as a lighting issue which led us to using a 10k light for most of our shoots. It worked, but was less than optimal. I don't complain (too much) though because I was given such unusual access to shooting him because of the brand spanking new digital camera, technology limitations or no!!

It was certainly a learning curve due to the iso limitations of 200, the iffy sensor and the lack of support in processing images. I often tell people that their phone cameras are better than what was a $40,000 camera in 1997, because it is so true!

Were you ever on site when Prince had a photo session with another photographer? For example, Herb Ritts or Randee St. Nicholas? Did you compare your style or your work to theirs? What did you take away from watching them work with Prince?

I was not, but was envious of the idea that they had studio lighting and I am sure in many cases - assistants. I can't speak to what their style of work was like, since I never saw it. I can say mine was pretty much guerrilla style, grab the camera and go for most of the shoots. When we did set up lights it was usually just me, him and the 10k light!! I loved that outdoor lighting was the best (though I wish I had a bounce or reflector - see I WILL complain) because he liked the results and it meant we shot more outdoors.

How do you think Prince got the idea that you would be a good photographer? Did you show him photos you had taken?

Prince seemed to look at someone's skill set as a whole. He looked at one thing you did, and if he liked how you did it, he gave you other opportunities to take that skill and expand it. It’s really remarkable that someone who could really work with ANYONE would prefer to champion people he already worked with and allow them first crack at something when he could have easily found an accomplished person in whatever field he was looking for. Of course that meant busting your ass to live up to expectations but I can think of no greater motivation than having a guy who had done that for himself in every step he took asking it of you. As you know, the hours we would put in were tremendous, but they didn’t compare to the hours HE put in.

You had many quiet moments with Prince which could be considered “idea-generating” moments for him. For example, you would both listen to music together, and also you would give him your own opinions at times, which genuinely made him think. Not many people can say they shared that kind of relationship with a creative genius. What do you think you brought to Prince’s creative table? What did he get from you in those quiet moments together? And going a step further, what do you know, beyond a shadow of a doubt, that he created BECAUSE of Steve Parke?

It was really pretty fascinating to look back on what was, at the time, simply work. I think we had an easy rapport which I will chalk up to doing something he wanted to be involved in but I had a skill set that was not his. I also am/was pretty much up for whatever he brought to the table, I’m sure that didn’t hurt things. And yes, we listened to and talked music among other things.

I seemed to be in tune to what he was thinking about, but I also kept on my creative toes by paying attention to what he was into - clothing wise (easy to see)  or general things he said he liked visually (paying attention). He once told me I was the most “in the moment” person he ever met. Which I probably didn’t get at the time, but it was true, I was there for whatever was next.

As you know it is probably hard to define the relationship you had with Prince, because he wore so many hats and could vary who he was to you depending on the day. It is often through others you get perspective. Prince often had me come down to the studio to listen to what he was doing as he recorded, or play me finished tracks on my office sound system via cd or cassette tapes.  Shane Keller told me that was not par for the course, I just assumed it was. Like if he was happy with what you did he shared that part of his creativity with you. In fact, Shane told me, I was in the studio with him more frequently than his band. Something I could have never guessed.

Prince told me he liked to finish the album covers and backs to create "an order he had to fill," which is very cool because it really let me be part of the process.

One day I was was working on a photo I shot during the Holy River video filming, and added some new (but rudimentary) paint filters, which I messed around with until I got something reasonable. Prince walked in and asked what i was working on and looked over my shoulder. He asked me to print it out, which was unusual for just a photo (usually we did that for cd package mockups). the next day he walked in with a cassette in hand and popped it into my player. It was "Welcome 2 the Dawn" - he had the printout in his hand and said "I wrote that because of this." I have to say, to this day, that might be the thing that floored me the most over all the things I did with him. Then again.....

What is your favorite Prince song?

That is always a hard question. When I think hard about it I love things like “If I was Your Girlfriend” because it embodies so much of what made Prince a unique artist. But then I pop in a bunch of his B Sides and cant help but hear how many killer songs are in that set alone. “I Love U in Me” has some amazing harmonies - the kind I think separates Prince from pretty much any other singer, but then “Another Lonely Christmas” always hit me as such a unique song under the guise of a straight rock tune. Did I mention “How Come U Don’t Call Me Anymore”? That falsetto, that scream and piano stomp backing...genius.

Who was your favorite Prince “Lady”? Doesn’t have to be a girlfriend...could be a muse or a mother figure, or even a friend who you think brought something unique to his life?

Hm. That's tough. I pretty much got along with everyone, but Sheila has to be the one since she was super cool to me when I first met her and has always been a real champion of my work and me in general. I was talking with her when she was opening for Lionel Richie, we were talking about working for silk screen companies (she had and I was at the time ) and looked at me and said “it’s nice talking to someone who actually looks at my face the whole time”.

What is one thing you learned from Prince that you carry in your “tool box” every single day?

Nothing is really impossible. You may have to tweak plans, but if you really want it you’ll make it happen. He certainly embodied that every second as far as I can tell.

If you could do it all over again with Prince, what would you do differently this time?

Already know how to use studio lighting!

Actually I am pretty satisfied with my experience and relationship with him. I don’t know that I would change a thing, because there is so much amazing and it could change all that as well.

If Prince were to come back and answer one question for you, what would you ask him?

Do you ever take time for yourself?

Was there ever anything Prince said to you that you would engrave on a silver plaque and hang in your home?

“Stick to art.” It was, at the time, a snarky comment but I can see that it has served me well thus far...so snark aside, its pretty good.

Of all the work you did for Prince, what does your son Duncan think is the “coolest” thing?

He says “the Truth” album cover 🙂

***
Steve Parke is an award-winning illustrator, designer, and photographer. He worked for Prince for 13 years as his in-house art director at Paisley Park - doing everything from designing album covers and hand painting guitars to enlisting every spare pair of hands to melt candles for an impromptu music video. His photography work with Prince has been published in numerous magazines, including People, Rolling Stone, and Vogue, as well as in books like Prince Stories from the Purple Underground. His own book of Prince photography from this time, Picturing Prince, was published in 2017.