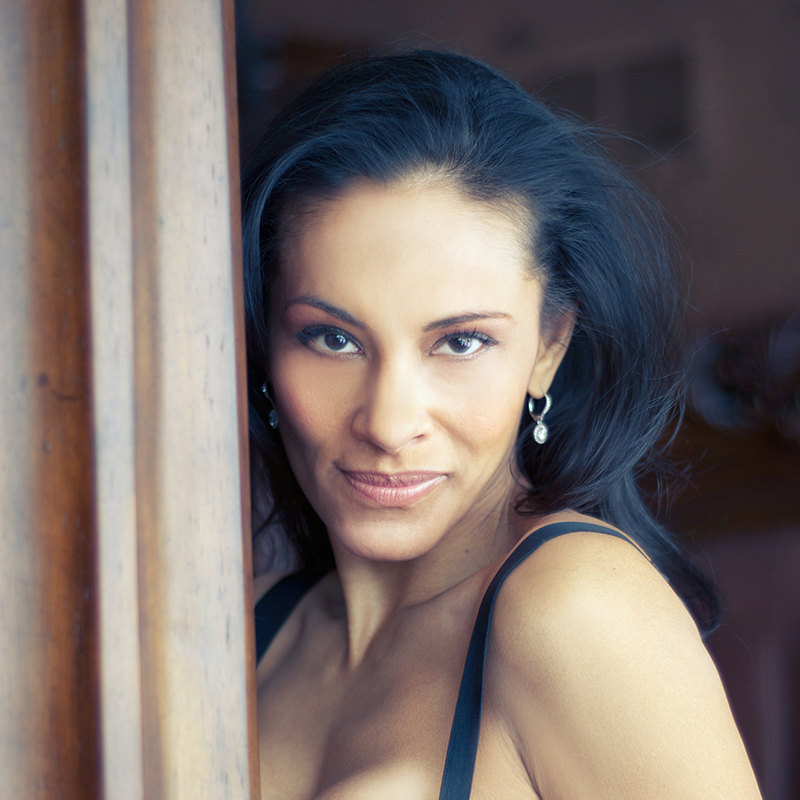 “The Minneapolis Sound Having Fun in Our Brief But Beautiful Summertime”

Leisl AuVante played a server in Morris Day's club in Graffiti Bridge, Prince's love interest in "Gangster Glam," and a woman reliving the birth of her baby with her family in "The Most Beautiful Girl in the World."

While those roles provided glimpses of AuVante and her relationship with Prince, off camera, her role in the pop superstar's life was more enduring.

"I sing off-key, make up my own words, and don't care who hears," laughs AuVante, in an apt summary of her outlook on life. It's an outlook that Prince found appealing, she says.

"I had an adventurous, rebellious spirit in me. I think Prince and I had a lot of that in common," she remembers. "If we wanted to do something, we were going to figure out how to get it done."

AuVante, now 50, lives in the Chanhassen area. She is still "most beautiful girl" material, with long dark hair, sparkling eyes, and a picture-perfect smile. But growing up in her hometown of Apple Valley, Minnesota, AuVante says she wasn't considered beautiful. Her mother was of German heritage; her father, a neurologist who worked at the Minneapolis Veterans Administration Hospital, came to the U.S. from India in his mid-20s.

A self-described "book nerd," the teenaged AuVante was on the cheerleading and dance squads. Those activities helped her to be accepted by some groups -- but not by all. Boys, in particular, harassed her, she says, recalling one boy who called her "Zambian," in a misguided attempt at racism. Despite the fact that AuVante had been modeling since age 14, when an agent discovered her walking out of the elevator with her mother in Dayton's department store, no one wanted to date her, she says. Even in her career as a model, the color of her skin prevented her from getting jobs in 1980s Minneapolis.

"I can look Black or Puerto Rican or Indian," she says. But what was in demand during that era was the "All-American girl," an unspoken code for blonde hair and blue eyes. AuVante was told again and again, "You're too exotic for this market."

When AuVante was 16 years old, she attended a Purple Rain concert at the St. Paul Civic Center (a series of five shows took place on Dec. 23, 24, 26, 27 and 28, 1984). During the show, a man wearing a laminate approached her, saying "someone wants to meet you." AuVante says she was "naive and unfamiliar with the dating world." Being unsure of strangers, she refused. The man persisted in inviting her backstage until she agreed on the condition that she could bring a friend. As it turned out, one of Prince's associates had spotted her in the crowd and wanted to meet her. AuVante was invited to join a private Christmas party following the show, which Prince hosted at the Shady Oak warehouse in Eden Prairie.

At the party, the associate was quickly edged out of the picture when "Prince saw me and swooped in," she says. The 26-year-old Prince asked her to dance. As she accepted, a phalanx of bodyguards formed a circle around them and stood, arms crossed, facing Prince and Leisl. Apparently, Prince didn't like anyone to hone in on his dance partners. Awkwardness ensued.

"Number one, I’m not the best dancer," Leisl laughs. "Number two, I’m dancing with a really great dancer. And number three, there’s all these people watching me, and I’m 16."

Despite the awkwardness, being at a party with the Prince crowd was a watershed moment for reasons that went far beyond the fact that she had been asked to dance by the world's biggest pop star. AuVante had glimpsed what might be considered Prince's "Uptown" come to life, a place where all races were mixing and enjoying life to the fullest.

"I felt like I had come home," she recalls. "I was where I was supposed to be, around people who were like me, who appreciated my presence, who wanted to date me," she says. "I went from being a very ostracized person to finding this group of people that was very open-minded and ethnically well rounded and didn’t put a lot of emphasis on what your color your skin is."

As it turned out, Prince's crowd would embrace Leisl for nearly a decade from the mid-80s to mid-90s, including a period when Prince was hosting regular private parties at Paisley Park and frequenting Minneapolis nightclubs. The experience of being in Prince's circle of friends sent Leisl on the adventure of a lifetime.

On a picture-perfect summer day in 1991, Leisl AuVante’s phone rang.

“We’re goofing around with a video camera at Paisley Park,” an enticing baritone voice said. “Hurry up and get over here and bring all of your best outfits.”

For a moment, AuVante considered the proposition. “Goofing around with a video camera – that sounds a little dangerous,” she thought.

But Prince had called AuVante for good reason. What he already knew about her was this: She was spontaneous and was ready for fun. She could act, she could match Prince's energy, and she could roll with the unexpected.

“He knew if the camera turned on, and we had no script, I could just go and improvise," she says.

True to form, AuVante decided to give Prince's proposition a chance. She grabbed her best dresses and headed to Paisley Park. There, she was greeted not simply by Prince goofing around with a video camera, but by a full complement of hair stylists, makeup artists and a camera crew.

"We're filming something?" AuVante asked in surprise. It was the first in a series of surreal moments that occurred during the two-day video shoot for "Gangster Glam," a non-album track released on the "Gett Off" maxi single. ("Gett Off" was the first single released from Prince's thirteenth studio album, "Diamonds and Pearls.") The video shoot would take AuVante from Prince's inner sanctum at his private office and inside his Galpin Road home to Minneapolis' hottest nightclubs.

AuVante's initial surprise at discovering that she'd be performing in a music video with one of the biggest pop stars in the world was nothing compared with the next moment, when Prince emerged in an ensemble that might mildly be described as unconventional, even by Prince’s standards.

“When saw him in Speedos and suspenders and rollerskates, I was like, `What the heck?’” she says. Still, there was no time to ponder the situation, she says. “Prince said, `The music’s going to come on and we’re going to go.’”

The spontaneous video shoot is all the more striking when viewed in the context of the times. The early 90s were far from a “throw-on-your-suspenders-and-Speedos and make a video” kind of era. Pop culture was dominated by the image of the perfectly coiffed, designer-clad, vogue-ing runway supermodel. Prince’s musical rivals George Michael and Michael Jackson were sinking huge dollars into mega-budget videos. In 1992, George Michael came out with “Too Funky,” a video directed by French fashion designer Thierry Mugler and starring supermodels Linda Evangelista, Nadja Auermann and Tyra Banks. Not to be outdone, Michael Jackson created “In the Closet,” a short film directed by fashion photographer Herb Ritts and featuring supermodel Naomi Campbell.

According to AuVante, they were standing in the parking lot in front of Paisley Park, with Prince's best cars lined up and members of the NPG wearing crazy loud 90s outfits, when a boombox appeared, and someone hit “play.”

What resulted was some of the most joyous footage of Prince ever captured on camera.

Prince climbed on top of his yellow BMW and screamed his lungs out. He jumped onto the car's hood and slid down, wrapping his legs around AuVante. He did push-ups, poolside, in a mankini (“It was weird to see him in his bare feet,” AuVante says. “I always saw him in high heels.”) He toyed with his sunglasses, placing them on AuVante's face and admiring the result. In his office, AuVante sat in his lap and later, Prince waves her arms in the air like she's a marionette. Then, Prince bursts into a dance with AuVante looking on from his desk chair.

Prince tried to get AuVante to lip sync for part of the song where he samples Aunt Esther from Sanford and Son. (Aunt Esther was the staunch Baptist sister-in-law of Fred Sanford who was constantly critical of him).

“When that part came on, he tried to get me to say, `Hold it, Fred!’” she laughs. “I tried over and over but I couldn’t catch the rhythm. He knew I was always a beat behind.”
As darkness fell, Prince put AuVante in his limo and sent her downtown.

“I had no idea where I was going or what we were doing,” she says. They wound up at The Perimeter, the hottest nightclub in town.

During one sequence outside of the club, Prince moved in close and grabbed her breast. Acting on instinct, AuVante spun Prince around and pinned him against the wall.

"`Wow, what are you doing, we don’t have this kind of relationship!" she recalls thinking. "And then I realized, `Oh wait, we’re on camera.”'

In the editing process, Prince reversed those two shots. Rather than the actual sequence in which Prince gets fresh with AuVante and then gets his comeuppance, the final version makes it appear that AuVante is cozying up to him against the wall to whisper an intimate secret, and then he grabs her breast. "It comes off as me whispering sweet nothings," AuVante says, shaking her head at Prince's clever editing.

At night's end, AuVante jumped into Prince's yellow BMW with Prince and Tony Mosley in the front seat. Driving home to Paisley Park on Minnesota's open roads, they were trailed by two cars, with cameramen filming out of the sunroofs.

“It is one of my best memories,” AuVante says of those two glorious summer days with Prince. “To me, the video screamed, `the Minneapolis Sound having fun in our brief but beautiful summertime,’ and that’s exactly what we were doing.”